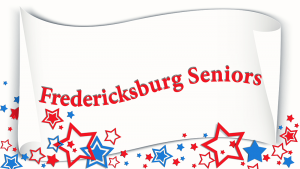 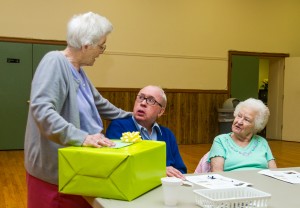 Catherine giving a special gift to Rev. and Mrs. Hogue

We were so saddened to learn of the death on Tuesday, December 22, 2015, of Charlene Hogue, wife of Reverend Wayne Hogue, our former Chaplain.

Rev. Hogue and Charlene joined the Fredericksburg Seniors in 2000. They were featured in the June 2015 Newsletter, where Rev. Hogue mentioned “he first met his lovely wife in Findley, NY, at a camp meeting to study the Bible, and later married on October 19, 1958 in the Buffalo, NY, area.”

We always saw Charlene at her husband’s side and was a faithful and loving wife to Reverend Hogue. Mrs. Hogue will be missed.

This is the additional information  promised:

She is survived by her husband of 57 years, Rev. R. Wayne Hogue; children Carolyn Jones of Manassas, David Hogue (Rosa) of Fredericksburg and Lori Hogue (Leigh) of Charlottesville; three grandchildren Natasha Grant, Kara Hogue and Bryce Hogue; and brother Wesley Taylor (Rosemary) of Cowlesville, NY.  She was preceded in death by a brother William Taylor.

Born in Buffalo NY to John and Olive Taylor, Charlene was a Registered Nurse who received her nursing diploma from Edward J Meyer Memorial Hospital in 1952.  She practiced nursing until her retirement.  She was a devoted wife and mother who moved several times in her life alongside her husband, a minister who served most of his career in the Central Pennsylvania Conference of the United Methodist Church.   They moved to Fredericksburg upon his retirement in 1999.

The family will receive friends for viewing at 10 AM on Monday, December 28 at St. Matthias United Methodist Church, where she was a member.  A service will begin at 11 AM, followed by interment in Sunset Memorial Gardens and a reception at the church.

In lieu of flowers, memorial contributions may be made to St. Matthias United Methodist Church, 426 Deacon Rd. Fredericksburg, VA 22405.